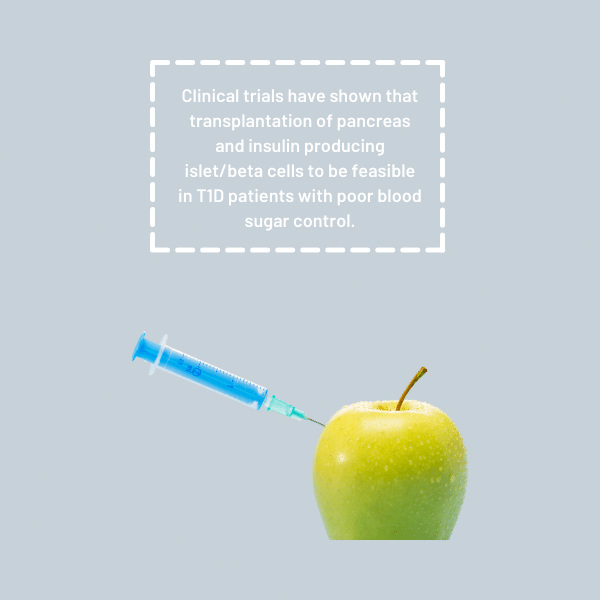 Diabetes facts Diabetes represents a major health crisis worldwide. Approximately 537 million adults (aged 20-79) are currently living with the condition and the total number of people with diabetes is projected to rise to 643 million by 2030 and 783 million by 2045.

Diabetes (diabetes mellitus) is not a single disease, however all types share a common problem where the pancreas either does not produce enough insulin or the body cannot effectively use the insulin it produces. Insulin is a critical hormone that regulates blood sugar. Raised blood sugar, (a condition called hyperglycaemia), is a common effect of uncontrolled diabetes and over time this leads to serious damage to many of the body’s systems.

There are two main types of diabetes: type 1 and type 2. With Type 1 diabetes (T1D) the pancreas cannot make any insulin at all. Type 2 diabetes (T2D) differs as the insulin manufactured either does not work properly or not enough is made.
Other types of diabetes include gestational diabetes, which some women may develop during pregnancy. Finally, there are other much rarer types of diabetes.

In all types of diabetes, there is a build up of glucose in the blood, as the pancreas cannot regulate it. This leads to many serious symptoms in the long term including damage to the heart, eyes, feet and kidneys. It is a stark fact that diabetes leads to almost 9600 leg, toe or foot amputations every year in the UK, which is equivalent to 185 per week.

Around 10% of all people with diabetes have T1D. T1D is caused by cells of the immune system called T cells that become inappropriately activated and kill the insulin producing cells in the pancreas. This results in reduced insulin levels and too much glucose in the blood. Why this happens is not fully understood but it is linked to a combination of genetic and environmental conditions.

T1D can affect people at any age, but usually develops in children or young adults. People with type T1D need daily injections of insulin to control their blood glucose levels. These patients must carefully monitor their blood sugar levels to make sure the level is in the correct balance. If people with T1D do not have access to insulin, they will die.

Around 90% of people with diabetes have T2D which is largely the result of excess body weight and physical inactivity. Until recently, this type of diabetes was seen only in adults but it is now also occurring increasingly frequently in children.

Symptoms may resemble those of T1D but are often less severe. As a result, the disease may be diagnosed several years after onset, after complications have already occurred.

Insulin does an essential job in the body, as it allows the glucose in the blood to enter cells and fuel our bodies. With T2D, the body still breaks down carbohydrates from food and drink and turns it into glucose. The pancreas then responds by releasing insulin but as this insulin cannot work properly in these patients, the blood sugar levels keep rising. Ultimately, this can eventually exhaust the pancreas, meaning their body makes less and less insulin. This can lead to even higher blood sugar levels and lead to increased risk of hyperglycaemia related complications to the body.

Treating Diabetes and the potential for stem cell based therapies

Despite many decades of investigations uncovering the autoimmune mechanisms where the body destroys the pancreas in T1D, translating these findings into effective therapies has proven extremely challenging. The critical cells responsible for producing, storing and releasing insulin into the bloodstream are called beta cells and these are located in areas of the pancreas called islets of Langerhans. These are the cells that are destroyed by the over active T cells in patients with T1D.

The potential for stem cell based therapies for T1D has been recognised in recent years following a great deal of research. Although most of the effort has been directed at T1D, some consideration has also been given to whether T2D may also benefit from stem cell treatment.

However, despite the above progress, there are challenges associated with a critical shortage of pancreases and islets derived from human organ donors and also protecting these cells from attack by the immune system after transplant. There has recently been progress to attempt to solve the supply problem, as it is now possible to generate insulin-producing beta cells in the laboratory. These processes use either human embryonic stem cells (ESCs) or induced pluripotent stem (iPS) cells. The latter are stem cells sourced from adult cells such as skin, blood or bone marrow that have been genetically reprogrammed to change them into another cell type such as insulin producing cells.

In addition to looking at ways to increase the number of functional beta cells in patients with diabetes, scientists are working on ways to protect replacement beta cells from immune mediated damage. Immunologists and bioengineers are engaged in a range of strategies to protect transplanted cells from immune attack. One approach is to use cellular engineering to make the cells more resistant to attack and another is to encapsulate the cells within semi-permeable membranes to protect them from the cells of the immune system. Such capsules are porous and would allow small molecules such as glucose and insulin to pass through while protecting the beta cells from the cells of the immune system. These investigations are ongoing and have yet to yield conclusive results.

Another cutting edge approach has focussed on stem cell treatment to down regulate the autoimmune destruction of beta cells in patients with T1D. The strategy utilises ex vivo laboratory generated and optimized T regulatory cells (Tregs), which can function to damp down overactive immune responses. Treg activity has been shown to be impaired in those with diabetes, so the technique aims to restore the balance. To test Treg therapy in T1D, phase l clinical trials have evaluated the safety and efficacy of infusing Tregs with the aim of reversing recent onset disease in patients. Children with newly diagnosed T1D participating in such trials, received infusions of Tregs harvested from themselves (autologous) that had been expanded ex vivo in a laboratory. Outcome data has indicated that the treatment was well tolerated and safe and some children became less dependent on insulin. At a 2 year follow up, some still required lower doses of insulin, especially those who had received two doses of Tregs.

The safety and success of transferring autologous laboratory expanded Tregs to recent onset T1D patients has also been tested in a recent phase ll clinical trial. However, even though the treatment was well tolerated, patients failed to show significant and sustained improvement.

The mixed results from these studies may be due to many factors such as differences in patients and trial design or whether this treatment as a stand alone option is efficient. A new trial is currently evaluating the administration an immunotherapy drug called IL-2 along with autologous Tregs to try to improve survival and function of the transferred cells.

Apart from those cell types mentioned above, various other kinds of stem cell have been investigated in preclinical as well as clinical settings. Umbilical cord blood (UCB) and umbilical cord tissue (UCT) cells have proved to be useful, providing several advantages over other sources. Importantly, UCB/UCT derived stem cells are readily available, can be obtained non-invasively during the process of delivery and have no ethical complications such as those associated with embryonic stem cells. Their straightforward banking potential contributes to their importance and relevance in regenerative medicine applications including the potential for treatment of diabetes.

UCB contains a diverse mixture of cells and is a major source of stem cells that can develop into many different blood cell types, capable of creating the blood and immune system. UCB contains other types of stem cell including Tregs (mentioned above), which have the potential to treat immune disorders such as diabetes. Mesenchymal stem cells (MSCs), which are key players in regenerative medicine, are also present in UCB however the Wharton’s jelly layer inside cord tissue has been shown to be exceptionally rich in these valuable cells.

MSCs have the ability to help heal or regenerate injured or diseased tissues using several modes of action. They can differentiate or develop into certain different cell types. However, more importantly, they are able to damp down harmful immune processes such as those seen in T1D. They possess anti-inflammatory potential and also produce a range of proteins that can promote healing of damaged tissues at sites of injury.

A recently published meta-analysis of clinical data revealed evidence for the superior efficacy of MSCs derived from UCT compared to those from UCB in treating both T1D and T2D with donated UCT and autologous CB typically being used. Despite some encouraging results, the authors highlighted that further clinical studies will be required to investigate the therapeutic efficacy of selected or enriched UCB-derived cell populations with immunomodulatory and/or regenerative potential.

In Australia, a team have undertaken a world-first clinical investigation known as the CoRD study, to assess whether the Tregs and/or MSCs cells found UCB can stop the immune destruction of beta cells in the pancreas and protect children at risk from developing diabetes. The study has been recruiting high-risk children (who have a close relative with type 1 diabetes) and have their UCB stored in a cord blood bank.

The pilot study involves eligible children receiving an infusion of their own pre-banked cord blood. The team hope that the study will help in the understanding of the immune system in children at risk of developing diabetes and may highlight ways to prevent this lifelong disease.

Phase I/II clinical trials have demonstrated the safety and the feasibility of using MSCs in both T1D and T2D, which in turn is setting the scene for more consolidation studies and innovative strategies.

The future for stem cell based therapies in diabetes: bench to bedside

The investigative landscape is continually evolving, and extensive pre-clinical and clinical trial work has resulted in stem cell based therapy being considered as a genuinely promising option for diabetes treatment, especially T1D. However, many questions and technical hurdles still need to be solved. Well standardized laboratory/banking protocols for clinical grade cell products are required. Additionally, there is a crucial need for stringently designed randomized, controlled trials with larger patient cohorts. Undoubtedly, despite the obstacles, the application of stem cell-based therapies represents an exciting and potentially viable approach for treating the lifelong burden of Type 1 diabetes