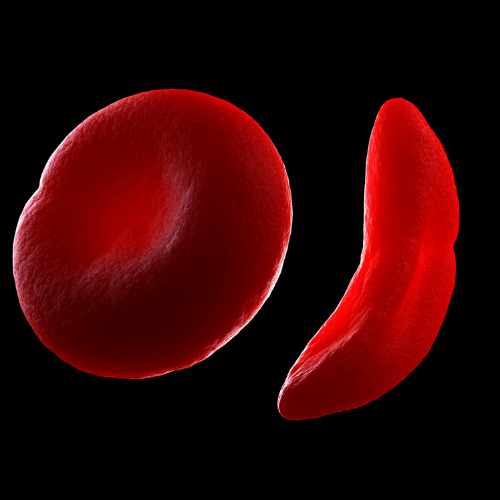 Haemoglobinopathies – the facts and treatment options

Sickle cell anaemia and thalassaemia belong to a group of conditions called the haemoglobinopathies. These inherited conditions involve problems with haemoglobin (Hb) which is an iron containing protein that is found in red blood cells and is responsible for transporting oxygen from the lungs to the rest of the body. (1, 2)

Each Hb molecule is made up of four sub units with two alpha globin and two beta globin sub units. The globin units are sometimes called chains and carry heme molecules that in turn contain iron.

Each iron rich heme molecule can bind onto one oxygen molecule which means that each hemoglobin molecule is capable of binding four oxygen molecules. Heme molecules with more oxygen, for example in red blood cells that have just picked up oxygen in the lungs, are brighter red. Because of this, oxygenated blood in the arterial system is bright red, while venous blood that is deoxygenated is darker red. Each human red blood cell has 640 million molecules of haemoglobin. (3)

What can go wrong?

Diseases such as sickle cell anaemia and thalassemia decrease the blood’s oxygen-carrying capacity and ability to deliver oxygen to tissues.

Thalassemia is caused by a defect in either the alpha or the beta subunits of Hb. There are several types of thalassaemia, some relatively mild and others which are very serious. Around 100.000 people are born each year with severe forms of thalassaemia, most usually with Mediterranean, South Asian and African ancestry.

Patients with clinically relevant thalassemia produce a high number of red blood cells, but these cells have lower-than-normal levels of hemoglobin so the oxygen-carrying capacity is reduced. The main types of thalassaemia are alpha and beta. (4, 5, 6, 7)

Alpha thalassaemia, which is common in Southern China, Southeast Asia, India, the Middle East and Africa results when the haemoglobin fails to produce enough alpha globin protein. To make alpha globin protein, four alpha globin genes are required, two from each of our parents. The severity of the disease depends on the how many genes are mutated:

Beta thalassaemia tends to occur amongst people with Mediterranean ancestry and is most prevalent in North Africa, West Asia and the Maldives. As with alpha thalassaemia, the severity of the condition depends on the number of genes that are mutated:

In moderate or severe cases, it will typically be apparent that children have thalassemia by the time they are two years old. People who are both carriers with only one gene mutation and no symptoms may not realise that they have a genetic defect until they have children.

Blood and genetic testing are typically undertaken to demonstrate the level of anaemia and to check for faulty genes. It is possible to undertake prenatal testing to show if a developing foetus has thalassemia and can indicate the severity of the condition.

This blockage, known as sickle crisis can be very painful when it occurs. Sickle cells are fragile and can break up prematurely leading to a shortage of these critical oxygen carrying cells. Sickle cell disease is most common in West Africa and India (10).

Sickle cell anaemia is caused by a mutation in the haemoglobin-beta gene. In individuals with sickle cell disease, abnormal haemoglobin S molecules are produced which causes the red blood cells to become stiff, sticky and sickle shaped – this prevents the (normally smooth) cells from gliding through blood vessels. Children born with sickle cell disease inherit a faulty gene from both parents. If both parents have the genetic defect, there is a 25 percent chance that each child will be born with the disease (11, 12).

Carriers have inherited one normal haemoglobin gene and one sickle haemoglobin S gene. Individuals, who carry the sickle cell trait, are relatively symptom free but must be careful in situations where there may be a reduction in the supply of oxygen, for example when having a general anaesthetic or during activities such as deep-sea diving or mountain climbing. Such individuals can pass the defective gene to their offspring (13).

Carriers have inherited one normal haemoglobin gene and one sickle haemoglobin S gene. Individuals, who carry the sickle cell trait, are relatively symptom free but must be careful in situations where there may be a reduction in the supply of oxygen, for example when having a general anaesthetic or during activities such as deep-sea diving or mountain climbing. Such individuals can pass the defective gene to their offspring (13).

Blood testing can detect hemoglobin S, the defective form of hemoglobin. Blood samples from these patients have large numbers of sickled red blood cells – the hallmark of the disease.

Recently, a technique used in conjunction with in vitro fertilization, called pre-implantation genetic diagnosis (PGD) has been developed. This enables parents who carry the sickle cell trait to test embryos for the defective gene before implantation and to choose to implant embryos free of the sickle cell gene.

Until recently, people with sickle cell disease were not expected to survive childhood. Nowadays due to improved medical care, approximately 50% of patients live to 50 years or more.